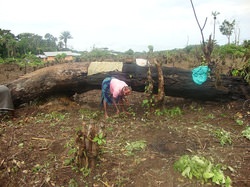 Our campaigns and advocacy are driven by specific issues affecting communities. We do this by liaising with partner organisations at national and international level. In the UK we lobby the British government and major companies working in the region. For example, the British government is the largest aid donor to the Sierra Leone administration, and we believe that the former has the capacity to influence the later about the treatment of juveniles in prison, improved access to education, women’s rights, and better treatment of disabled people.

We also endorse the Arms Trade Treaty campaign proposed by Amnesty International and OXFAM. We add to this campaign our belief that economic and educational deprivation, social and political instability is exacerbated by arms conflict and corruption.

This audio article by Journalists for Human Rights looks at conditions at the approved school.

This piece by The Independent newspaper, UK, focuses on the work of one of our supporters, Fernando Moleres. It depicts the life of juvenile prisoners at the Pademba Road prison.

Our desire is to make a lasting impact on the way policies affecting communities are formulated and implemented.

Why we do what we do

Watch this two-minute video to get the answer:

It is about a boy who was caught stealing food in one of Freetown’s many markets. Most of these young offenders, when they are caught by the police, are taken to the Pademba Road Prison where they are held in remand for years. Upon their release, they return to the same life of petty crime fueled by unemployment and lack of skills. See our Youth Unemployment and Crime programme to see what services we provide.